HMI development: Incari is working on the digital cockpit of the future for aircraft and ships

Customized and intuitive interfaces – but not only in cars. The Berlin-based software company Incari is working on new Human Machine Interfaces (HMI) that tap the potential of digital technologies in the aviation and shipping industries, in a move that will set new standards in cockpits and on ships’ bridges. As with the cooperation with Piëch Automotive in the development of the digital cockpit in the Piëch GT electric sports car, the Incari method promises an efficient and cost-effective approach towards visionary HMI interfaces in other industries as well.

“Incari can be used wherever human-machine interfaces are needed,” says Osman Dumbuya, founder and CEO of Incari. “The days when the mouse was the only interface for computers are over. Touchscreens, gesture control and voice control are a reality today. But augmented reality, remote touch and computer-brain interfaces are just beginning. At Incari, we are providing the technology needed to unlock the potential of new technologies across many industries.” 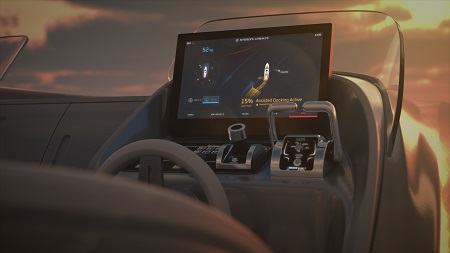 Incari breaks with the traditional methods of HMI development. Designers and developers no longer work sequentially on new technologies. Instead, they work in parallel and together in a common software environment from the very beginning. Thanks to this approach, subsequent adjustments, which are often time-consuming and cost-intensive due to non-implementability that is only discovered later in the process, are completely eliminated.

Incari’s software also takes a 3D-first approach. This offers entirely new possibilities in user comfort – especially in conjunction with augmented reality (AR). The Incari method promises a reduction in development times in the HMI area of up to 70 percent with simultaneously lower personnel requirements and a higher-quality end user experience.

Incari Studio is a software platform with an intuitive visual user interface. It enables users who lack programming skills to design complex interfaces in 3D, while at the same time generating a very clean programming code. Moreover, Incari provides a common software environment for developers and designers who are already in the prototyping phase. This brings flexibility and saves time.

“Using traditional development methods, changing the design of just a single element often takes up to 14 days and involves five-figure sums. With Incari, it can be done in minutes,” Dumbuya said.

While the ease of use of cars is changing rapidly, other industries are lagging behind in the digital transformation. Incari reduces the complexity of HMI development and enables the use of state-of-the-art technologies. Thanks to these, the control of aircraft and ships also becomes easier and safer. Other application areas include the virtual representation of three-dimensional construction plans on construction sites or in medicine, for example, with the remote control of a surgical robotic arm.

“In the future, screens and displays won’t be the only user interfaces; projected, on-the-fly, customized widgets will become a reality at Incari in the next few months – rather than in 2054 as depicted in the movie Minority Report,” Dumbuya says.

Incari was founded in May 2021 by Osman Dumbuya and Alexander Grasse. Incari is based in Berlin and has offices in France and Poland. Currently, about 50 people work for the start-up.

San Antonio, TX (journalstart ) September 21, 2022 – Hondas are some of the best vehicles one can get on the market today. These vehicles

Incari was founded in May 2021 by Osman Dumbuya and Alexander Grasse. Incari is based in Berlin and has offices in France and Poland.
All Posts